Here is the Kilimanjaro summit photo! A celebration of the life of Scott Fischer (RIP on Everest) whom I climbed with on Ushba in Russia. Scott helped establish the Shira Route and one of the last ice climbs across the Western Breach. He worked with my guide Roman almost 30 years ago. (the stories kept us laughing all the way up) 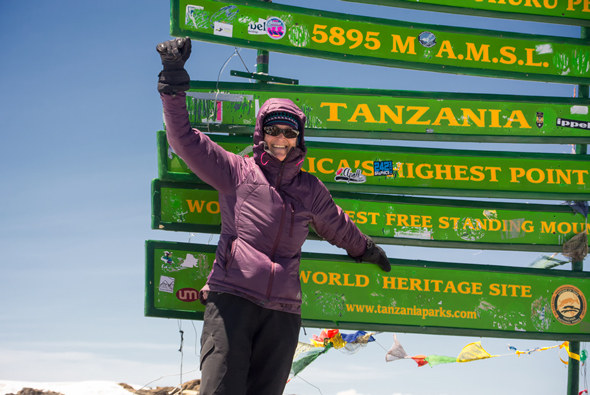 Thank you Scott for encouraging me to live my climbing dreams!! You would love paragliding!!!
Posted by Unknown at 9:03 AM 0 comments

Check out this 60 min Aussie perspective of Wings of Kilimanjaro's epic adventure!

Check out this great MSN video - Mountain Madness
Posted by Unknown at 8:50 AM 0 comments 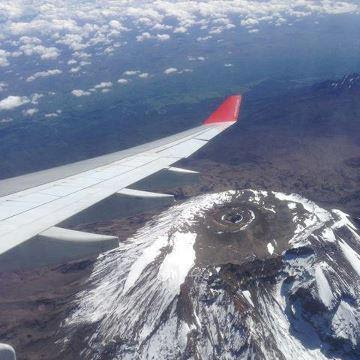 This was yesterday above Kili---7 days and counting!!!

Haskell prepares for Wings of Kilimanjaro

Fundraiser at The Rack set for Saturday at 6:30 p.m.

So far, Carrabassett Valley’s Johnna Haskell has raised over $1,700 towards the $10,000 cost of participating in February’s Wings of Kilimanjaro. Here she is fundraising at Sugarloaf’s Homecoming. (BJ Bangs photo) CARRABASSETT VALLEY — Johnna Haskell needs the support of the community and beyond to raise $5,000 before Dec. 31, the deadline for making what could be a once-in-a lifetime paragliding fly-off Africa’s Mount Kilimanjaro come true.
In February, she will be joining 200 paraglider pilots, some the best in the world, in the Wings of Kilimanjaro. She will be one of 12 pilots from the United States and one of three female solo pilots. She is the only Mainer in the event and the only woman from the Northeast. There are very few female pilots in the world, not over 10. It’s definitely a male dominated sport, she said.
She’s spent a lot of time and money training for the Wings of Kilimanjaro. You can’t train in Maine, she said. Paragliding is not allowed on any Maine mountain. It is allowable on Mt. Washington, but there are few days when it’s doable. That flight training in Mexico has made the fundraising imperative. Once she meets the $5,000 deadline, she still needs to come up with another $5,000.

Johnna Haskell will be joining 200 paraglider pilots in February’s Wings of Kilimanjaro. Here she’s pictured in the air. (Photo courtesy Johnna Haskell) To help make this happen, Seth Wescott has volun- teered The Rack for her fundraising event this coming Saturday, Nov. 24 at 6:30 p.m. The 50/50 raffle and auction featuring classic snowboard equipment, helmets, ski tuning and more will follow the showing of The Never Ending Thermal movie. Tickets are available through Haskell and at The Rack.
Making this event even more exciting is the fact that the Tasmanian government is opening up the mountain for this one-time event, Winds of Kilimanjaro, to raise money for charity. Funds will go to three specific organizations that address health, environmental and education issues.

Pilots climb to the top and fly off. It’s pretty much top to bottom, she said. She expects the flight to take about 55 to 60 minutes.
According to Haskell’s blog at johnnahaskell.blogspot.com, Mount Kilimanjaro is the highest peak on the African continent. It’s the fourth highest of the Seven Summits, and it is the tallest freestanding mountain in the world, rising 15,100 feet from base to summit. It is one of few places on earth encompassing every ecological life zone, from jungle, savannah and desert to mountain forest, subalpine plants and the alpine zone. About 70 percent of the 25,000 people attempting the climb every year make it. This will be the third of the seven that Haskell has conquered, including Denali’s Mt. McKinley.
She will start the climb Jan. 29, sleep on the summit at 19,000 feet the night of Feb. 4 and fly off Feb. 5. She’s climbed higher peaks at 19,600. “It depends on how your body adjusts,” she said. She plans to take it slow and easy. It’s not a technical climb. There aren’t any ropes. She’s hoping to get her glider and sleeping bag in the one free portered pack. “Normally, I’d be hiking with a day pack,” she said. She’s skimping where she can. At $1,000 for a canister of oxygen, which is recommended, she’s axing that as well. “I’ve cut everything I can cut out,” she said.

The proposed route is allowing six days to ascend the mountain. Because she’s spent so much time training in the air, she isn’t in as good as shape as she’d like, but she’s comfortable with the climb.
Haskell is an adventurer, mountaineer, skier, photographer and now a paraglider pilot. While some might consider this an extreme sport, Haskell said, “It’s just what I do.” She started paragliding in 2009 when visiting a friend in Slovakia. She was hooked following that first flight when she found herself flying like a bird.
To prepare for Kilimanjaro, she needs to fly in places with different thermal conditions. That’s why she’s spent time in Spain and Mexico. She’ll be returning to Mexico in December.
When you paraglide off high peaks, you need guides. “You can’t just whip over to the Alps and fly,” she said. Every mountain has unique weather patterns and characteristics, and you have to understand their microclimate.
Her longest flight is three and a half hours. Some pilots have been in the air for up to six hours. “Someone will be setting a record if the weather is good,” she said.
“You could be above the clouds. You might have to go down through the clouds, and deal with different winds at varying elevations. Flying down could be like navigating in fog while sea kayaking or sailing, making a compass mandatory.”
“Piloting takes a lot of work and a lot of skill,” she said.
“Trying to run off in thin air is really hard to prepare for,” she said. “You run and the glider flies.”
Haskell plans to work at one of the charities for the few extra days in Africa. Because she’s so heavily invested in training for the fly off, she’s forgoing sightseeing or a safari. “I’ll have to go back to Africa to see the big cats, gorillas and elephants, she said.

Return to top
Posted by Unknown at 9:56 AM 0 comments

Maine Woman to Soar Off Kilimanjaro
Posted by Unknown at 10:16 PM 0 comments 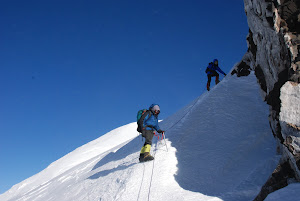